The Battle of McIntyre Farm 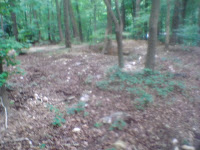 
Can you magine a force of 600 battle hardened veterans sent fleeing defeated and bloodied by only 14 men?  That's a ratio of nearly 40 - 1!  Imagine the commanding officer of the larger force being killed along with a good many others and the smaller force suffering no killed or wounded at all!  Imagine no more...this is the REALITY of the Battle of McIntyre Farm, October 3, 1780.  Rarely in the annals of history has such a small force wrecked havoc on such a large army!

Lord Cornwallis needed food for his army.  That is why he was sitting anxiously in Charlotte Town on the afternoon of 3 October 1780.  His couriers, his wagon trains and his pickets were under constant attack from some force out there in the dense Carolina wilderness.  "Where did they all come from?"  "Where and how do they so quickly disappear?"  "How could these blasted Presbyterians muster a force large enough to keep his army of thousands confined to their fortified camps?"  After crushing two Patriot armies at Charleston and then Camden, how could these few Bible believing Presbyterians keep the King's soldiers pinned down as if they were just so many cowards?  It was simply more than he could bear. He had determined in the days just prior that he would rely on, what in the 21st century, would be known as "overwhelming force."  He would deploy so many red coated soldiers, cavalrymen, horses and wagons as to send the bravest Patriot fleeing into the woods!

TO BE CONTINUED
Posted by Ulster's Son at 9:41 PM No comments:

The Powder Magazine at Williamsburg, Virginia