Today I visited the grave of my 5th great grandparents, John "Justice" and Esther (Waugh) Gaston, "Patriots of the Revolution" for the very first time.

It was a bitter sweet moment.

Sweet because after 6 years of searching, I finally found them.  (It wasn't easy)  Bitter because their grave has been all but forgotten save some very recent grave violators.  The slab was moved about 8" in an attempt to push it aside.  Apparently too heavy to slide further, the desecrators dug down and opened the tomb from the side.  I called the local police and reported the crime but never heard a word back.

In 1789 everyone in Chester revered the Gaston's.


The top slab you see today is not original. It was placed there by local patriots ca. 1900 when their memory was still very much alive. Today, no one remembers and no one seems to care. 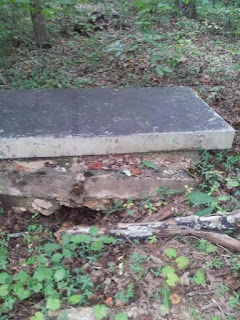 Prior to my photograph, the last known photograph of their resting place was in 2006.  The grave was compromised sometime between then and now.  Here is what it looked like in 2006:

In 1782, the Gaston's were the most notable, significant and important people in all of upstate South Carolina.  John had rallied the entire population of Scot-Irish Presbyterians to oppose the brutal English invasion by force.  They suffered much and paid dearly for their patriotism.  All their worldly possessions, save the family Bible, were destroyed by the English.  The two loving parents of 13 children were chased all over South Carolina by the enemy.  John's brother, Dr. Alexander Gaston, was murdered in cold blood by Tory thugs as his wife and son looked on in horror.  They lost a son in the war due to smallpox and lost three more on a single day in a single battle, the "Battle of Hanging Rock."  Ebenezer, Robert and David Gaston all perished on 6 August 1780, just a few miles from home.

Now lying in desecration, John and Esther rest in what is now called "Burnt Meeting House Cemetery."  The graveyard is located very near to Richburg, SC in Chester County.  Sometime before the end of the War for Independence the Lower Fishing Creek Meeting House burned and was abandoned.  However, for perhaps another 100 years or more, the local Presbyterian community continued to inter decedents here.  The cemetery is enclosed by a chain linked fence and is accessible via a high power voltage line easement.  Other notable people rest here as well including the oldest daughter of John and Esther as well as John's brother Hugh who died of the measles ca.1766.  Their graves, however, are either unmarked or unidentifiable.

For their selfless service, the community honored John and Esther with the largest tombstone and the highest elevation resting place in the cemetery.  Time has nearly erased the memory of these great patriots.  May their memories be rekindled once more by a new generation of patriots!
﻿
Posted by Ulster's Son at 10:39 PM No comments:

The Powder Magazine at Williamsburg, Virginia